I always thought of Beef Stroganoff as a ‘Hamburger Helper / 5-Minute Meal’ that I assumed was as bad as it was photographed on the cover of the box. It was not a meal I grew up having for dinner.

With no idea of where this recipe originates and no idea of what the taste should resemble, I unexpectedly fell down a rabbit hole learning about the history of Beef Stroganoff.

In the 1890’s, a French chef named Charles Briere won a St. Petersburg cooking contest with a dish he called Beef Stroganov. What’s unclear is if the chef named his dish after his employer, a member of the Stroganov family, one of the oldest & wealthiest of the time. It’s also possible that the chef simply attached his recipe to a name synonymous with wealth and aristocracy.

Either way, it perfectly expressed the French-Russian culture of the aristocracy. Browning meat to make a pan sauce & flavoring it with mustard was classically French, while beef in sour cream had long been a Russian favorite.

Beef Stroganoff became an American hit at the dinner table in the 50’s & 60’s. There’s the standard recipe of ground beef, onions, and cream of mushroom soup. And then there’s this recipe for Beef Stroganoff. Comfort food that felt hearty & light at the same time. A sauce made of chicken broth, heavy cream, sour cream, worcestershire sauce & dijon mustard. Tossed with mushrooms, tenderloin & egg noodles, it was delicious.

And it tastes way better than it photographs! 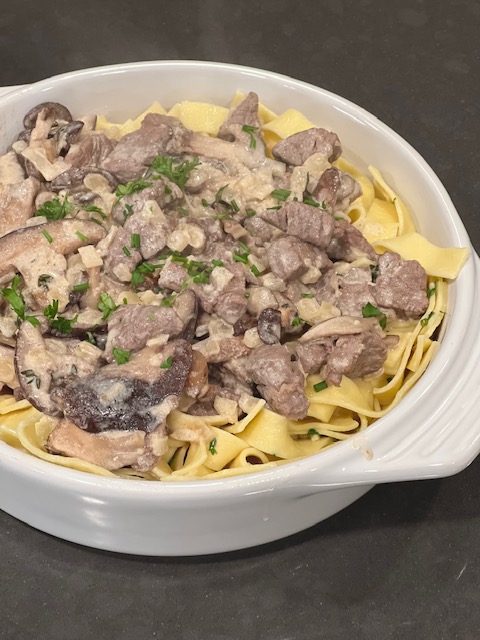